This guide presents various types of resources that you can find through the Library for research in Political Science. You'll find a brief description of each type of source below.

When researching a new topic, it's usually best to follow the process of moving from general (background) sources to gradually more specific (detailed) sources. This is why we highly recommend that you start with the Encyclopedias etc. tab, and then move through the other tabs from left to right. To learn more about how to conduct library research, visit our Research Help page. 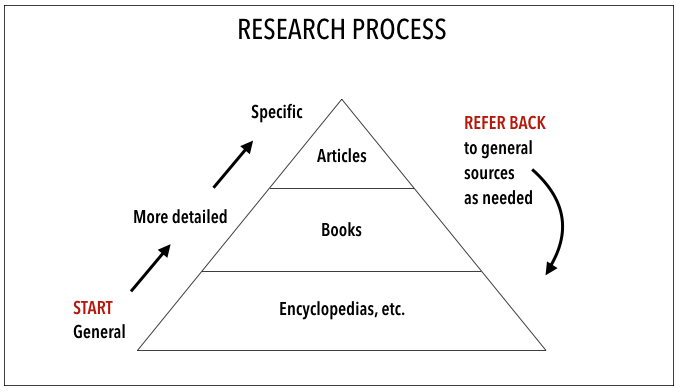 Encyclopedias etc.
These resources will give you overviews of your subject, define terms, list useful books and journals, and help you frame your topic. Start with these and return to them when you encounter concepts or terms later in your research that you don’t understand.

Find Books
Books generally provide more in-depth information on your topic. Scan the Table of Contents and the Index of the books you find, to see if they focus on your topic or on aspects of it.

Find Articles
Journal articles are shorter than books, and tend to provide less background information and focus instead on very specific topics.

Internet Sites
These are openly available, online sites that have been vetted by your librarian.

Citing Your Sources
Learn how to cite the sources you use using the Chicago Manual of Style.

When researching a new topic it is often necessary to get an overview, explanations of unfamiliar terms, or brief factual information. The print and electronic resources listed below include selected reference materials (dictionaries, encyclopedias, handbooks, guides, and standards) for the field of Political Science. To find additional reference materials, check UNB WorldCat (the library catalogue) or our Reference Materials database.

To search for books at UNB Libraries, first use the library's online catalogue, UNB WorldCat. UNB WorldCat contains materials held at the Harriet Irving, Science and Forestry, Engineering, and Law libraries, as well as the HW Klohn Learning Commons in Saint John. It can be used to look for material beyond UNB Libraries' holdings, and includes *some* journal article citations as well.

Books and other materials not available at UNB may be available for loan from another institution through our document delivery service. To search for materials not held by UNB Libraries, search UNB WorldCat, and change the default UNB Libraries to Libraries Worldwide. Once you have identified a title that is not locally held, select the red Request Item button and follow the screens. You can also access the document delivery request form directly.

To browse the shelves for books in Political Science, try the following ranges:

When searching for journal articles, an indexing and abstracting database or print index is usually the best place to begin. Below are some recommended print indexes and databases for research in Political Science. For other databases, check the Article and Research Databases  tab on the library website.

Listed below are some of the electronic journals related to political science and available through UNB Libraries. Please note that this is not a complete list; use the e-Journals search form to find other titles.

UNB Libraries also subscribe to many online new sources, including:

Hundreds of other news titles are available from other sources, including microfilm. Search the library catalogue or ask at the Research Help Desk if you are unsure of our news subscriptions.

While there is a wealth of information freely available on the Internet, not all sites are created equal. Careful evaluation is a critical part of doing research on the Internet. Below are some recommended sites:

Accurate, properly formatted footnotes, reading lists, and bibliographies are hallmarks of good academic research. Through citing, you acknowledge the source of any ideas you mention in your writing, document your research, and provide the information your readers need to track down your sources.

I am the liaison librarian for History and Political Science on the Fredericton campus, working with the Reference Services department.